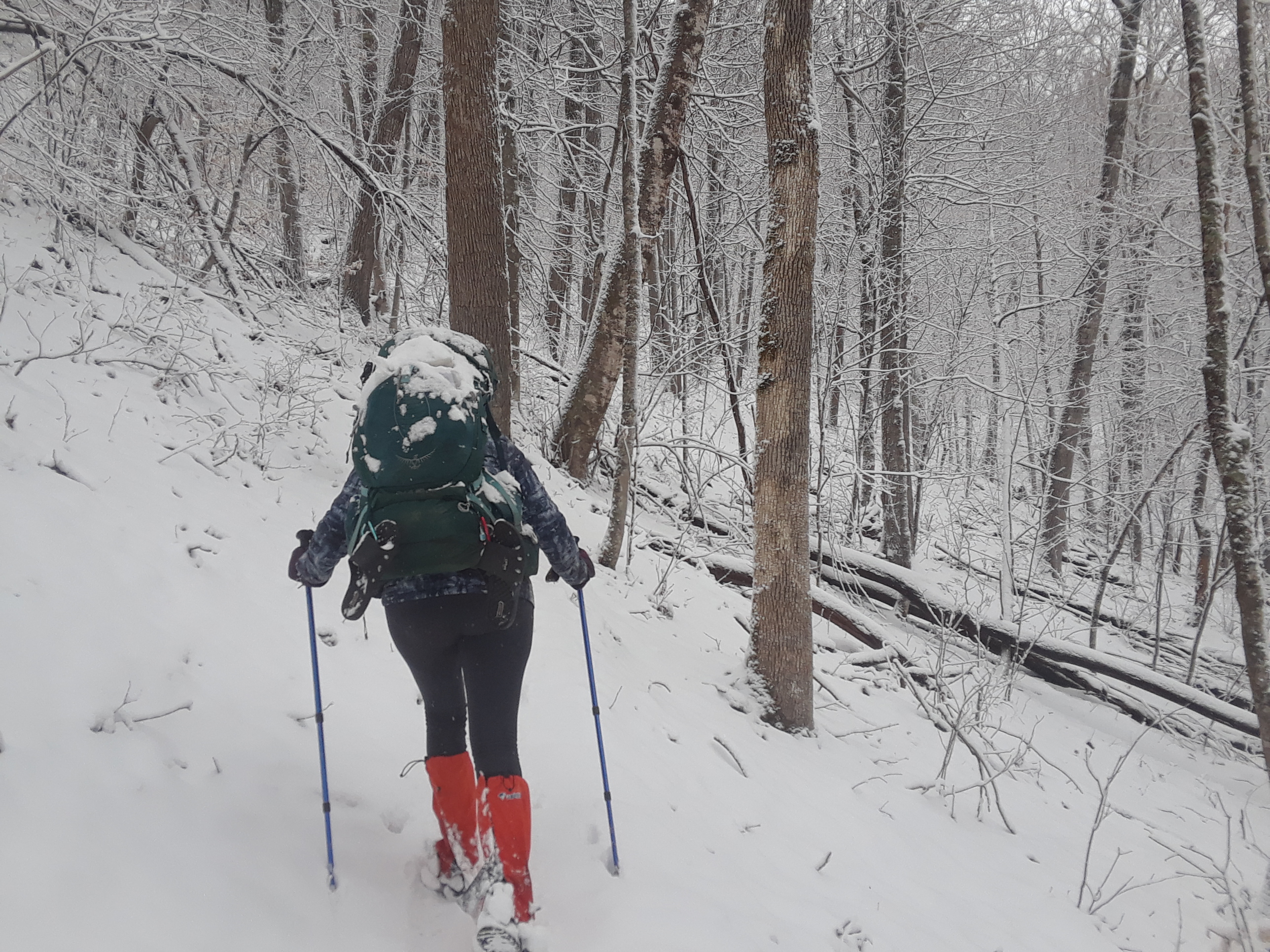 The AT hasn’t had a lot of trail magic yet. At least not the organized kind- I’ve been given Mountain Houses by section hikers and found beers in shelters. But the trail magic I have found is exactly where I need it- a tote of food when I am running out in the Smokeys, and a few days of slackpacking so I can sleep in the warm during more than a week of cold and snow.

We zero in Damascus, waiting for the storms to blow through. Hikers trickle in and pile up- no one wants to head out in the snow. Scoutmaster talks to his family and makes a plan. They’ll be here on Monday, can take us back to Massie Gap, and slackpack us. The thought of more time in town chafes, but it’s supposed to snow a little more each day, with nighttime temperatures in the low 20s. My sleeping bag can barely handle that and the skin on my feet is red and sore from the cold. I’m worried about trench foot. It’s the smart thing to do. I did my suffering on the CDT and I have nothing left to prove.

Emmett and Sherrie pick us up at 7 and drive us up to Grayson Highlands. The windy road makes me feel sick and the snow deepens as we climb. By the parking lot, there’s a good 6 or 7 inches. We head out. The trail is a little challenging to find at times, but we stay on it. 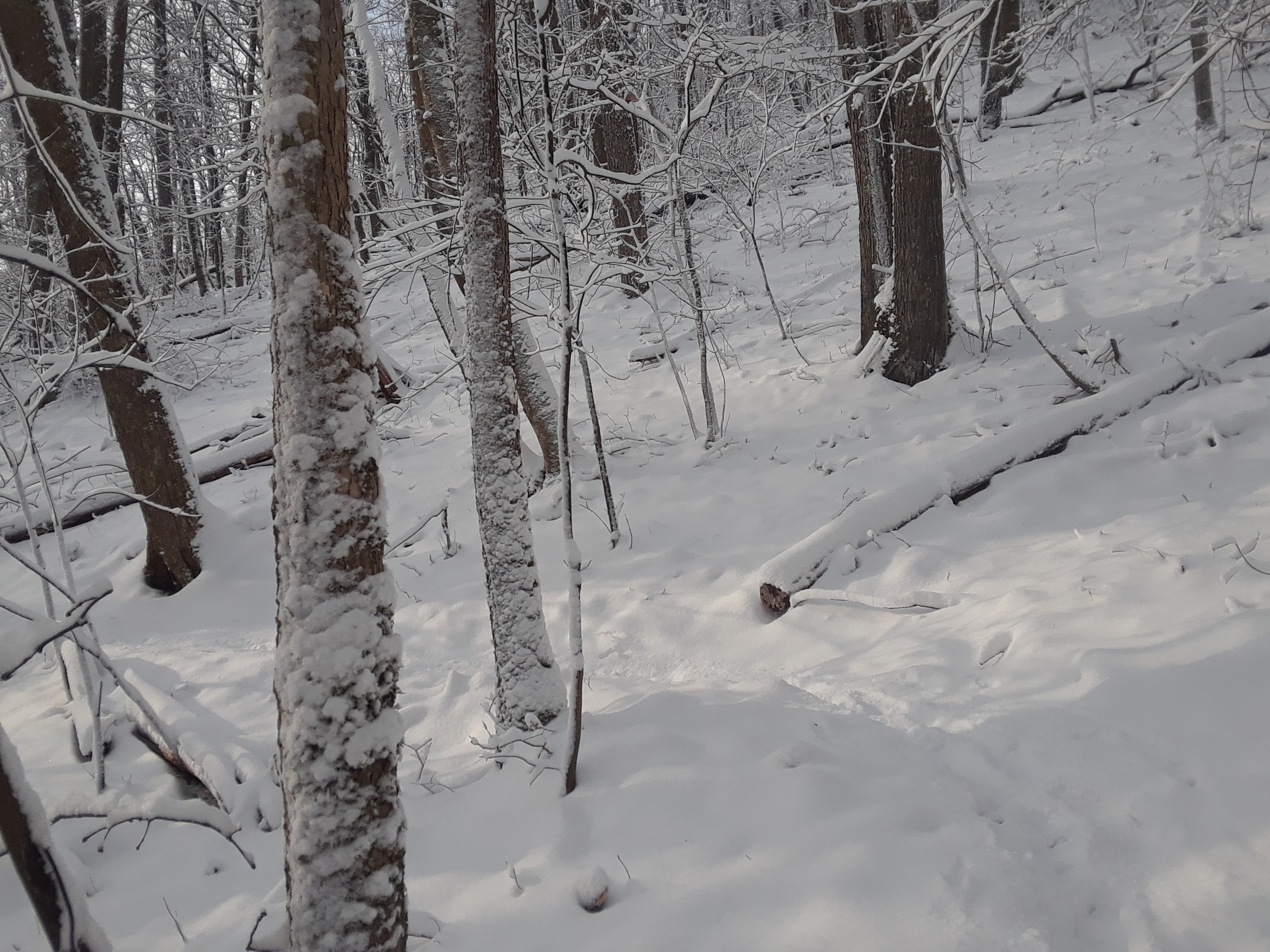 We pass a shelter, and suddenly there are footprints! I duck inside and check the register: Old Soul was here! She can’t be far ahead, and sure enough we find her just down the trail. She falls in behind us as we try to convince her to come to town. Her budget is tighter than mine, but we talk her into it. No one wants to be out in this snow.

We hike and talk, hike and talk, then before we know it, we’re back at the truck, where there are snacks and soda. We stand around shivering for a little, then all pile in for the run to town

We head out early for more of the same. It’s cold and snowy, which has quickly become our new normal. There are lots of rhododendrons to bash through. I’ve taken to calling them slowdodendrons- the snow bends down the branchs and you have to knock it off before you can pass. It’s impossible to knock it all off, and without fail some of it will fall down the back of your neck. It’s almost as slow going as the snow drifts that are blowing across the trail.

Emmett and Sherrie meet us with pizza at lunch and then Emmett heads out with us. He talks with Scoutmaster, but I’m starting to get sick of slogging. I put in my ear buds and have a dance party at the back of the group. By the time we make it to the highway, we’ve done 25 miles through the snow and it feels like nothing.

We leave a little later in the morning. Emmett and Sherrie drive us back to the trail and we say goodbye. Almost immediately, we are slogging through knee deep snow drifts, trying to spot blazes and the occasional visable bit of trail. Sometimes it’s little more than an indentation in the snow that lets us know which way to go. It’s only 15 miles to the shelter, and we make it with plenty of time. It’s supposed to get cold, so we huddle in our sleeping bags, making fun of Scoutmaster for everything from falling over to letting his fame go to his head.

It’s bitterly cold in the morning. We all sit around moaning about it and collectively decide we’d rather nighthike when it’s supposed to be a little warmer. I leave first, and am slowed down by the rhododendron enough that everyone else catches me. I’m a few miles down the trail when I see it. “Bear, bear, bear!” I yell. A cub scampers up a tree. We look but we can’t find mum anywhere. We bushwack to give baby plenty of room and then we’re past him.

We climb up and up, taking turns to break trail. In places it’s drifted past my knees, and firm enough to posthole. It starts to get dark when we’re 3 miles from the shelter. I’m the most confident navigator, so I lead. The snow covers everything- we look for blazes, but mostly, I feel where the trail goes in my soul. You learn the personality of a trail: the AT charges along the tops of ridges, rollercoasting up and down and hugging rocky outcroppings. When in doubt, I pretend I am a trail designer. I don’t get us lost, and we make the shelter with less than an hour of night hiking. We’ve only done 20 miles, but it’s one of the hardest 20s I’ve ever done.

I’m up and out before every one else in the morning. The cold has thrown my hiker hunger into over drive. I have double dinnered, double breakfasted and eaten all my snacks. Now, I am pretty much out of food. I bum some peanut butter from Old Soul, eat a cliff bar, and then I only have one Lara bar to get me to town. It’s 12 miles, and the snow is mostly melted out. I fly- 3mph and I’m at the little store just outside of Bland for lunch. I eat a cheeseburger and a mound of fries. Scoutmaster and Old Soul show up and order and I get a grilled cheese to keep them company. Then, an ice cream the size of a small child and I’m finally done. In fact, I feel a little sick. We roll out of town and climb to the shelter, clutching our stomachs and groaning the whole way.

Underhill shows up just before dark. We chat- we both hiked the PCT in 2016 and we know some of the same people. In the morning, we all roll out separately. I follow Underhill’s tracks through the snow drifts, as we leapfrog. Underhill and Scoutmaster detour to a store half a mile off trail, but I keep going.

I do stop at Dismal falls, a little off trail. I sit down and take a break. A man comes up to me and asks if I’m hiking as part of a group. I tell him I am (which would of course be my answer even if I wasn’t.) Then he asks “Are you Fun Size?” I’m a little freaked out. It turns out he watches Scoutmasters videos and recognized me. I’ve had in depth conversations with Scoutmaster about how he feels when strangers track him down and recognize him (for the record, he’s fine with it), but the idea of people doing that to me is not something I’m comfortable with. Luckily this guy is super nice and not creepy at all, but it still weirds me out.

I talk with this guy for a while, then head down the trail. I catch Scoutmaster and Underhill, who passed me while I was off trail, and then we find Old Soul too. The sky turns dark above us and thunder starts to roll. A half mile from the shelter, the rain pours down and lightning flashes. I feel like the AT has helped with so many of my CDT issues, but my fear of thunderstorms is still strong.

Another storm rolls in around 10:30. I pull my sleeping bag over my head, shaking and hyperventilating til it passes. In the morning, we talk about Wild and people hiking to heal themselves. I joke that I’m hiking to heal myself from my last trail, but it’s not really a joke.

It’s 20 miles to Pearisburg and I fly. I’ve eaten all my food again and I’m hungry and eager to make the most of the sunshine.