I spend the day at Boots off hostel mostly in bed, trying to feel better. Scoutmaster shows up around dinner time. My zero let him catch back up and I’m so happy to see a friendly face. 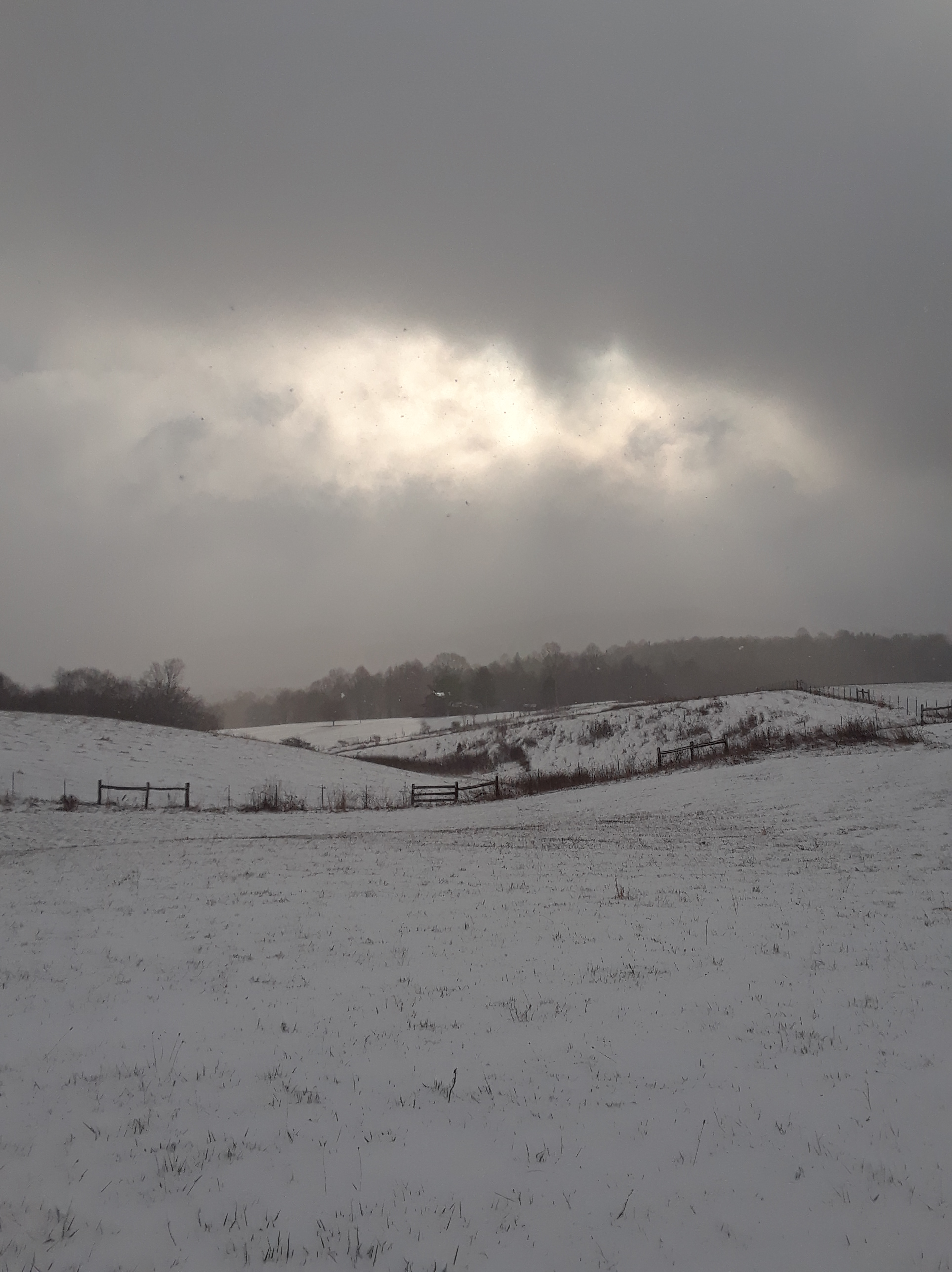 In the morning, Scoutmaster has a slackpack set up back to the hostel. His trail fame gets him a lot of free stuff and this is one of those things. I decide to ride his coat tails- this will give me two extra nights inside. I started this trail with a cold that lingered for a month. Part of the reason for that, I’m pretty sure, was the constant cold and damp of the trail. Hopefully this time I can beat it.

We get dropped off 20 miles from the hostel and hike fast through the drizzle, keeping up a steady stream of chatter. Scoutmaster loves to tell stories, and today he tells me about his Scout troop at home. We’ve done over half our miles for the day when we see Old Soul. We mess with her a little, telling her she’s going the wrong way

It’s an easy day hike and we make good time back to the hostel. We don’t see any other thru hikers and no one has shown up at the hostel. Lonely section of trail.

In the morning, it’s spitting snow. We climb into the truck and head back towards the trail. As we go up, the snow thickens. It’s 22 miles to Damascus. I do not want to camp in this. We start hiking. The wind strips all the warmth from my body. There’s only an inch or so of snow, but it’s enough to soak my feet. We run and run, and then we’re crossing the state line into Virginia. A quick round of photos, and then we are heading into Damascus, where there is a warm hostel.

We leave Damascus early, heading out into more snow. It thickens as we climb, with flurries coming down. Soon my feet are soaked again. We hit a shelter after 16 miles, where the snow is 4 inches deep. It’s supposed to get down to 23 overnight, so I wear every piece of clothing I own. 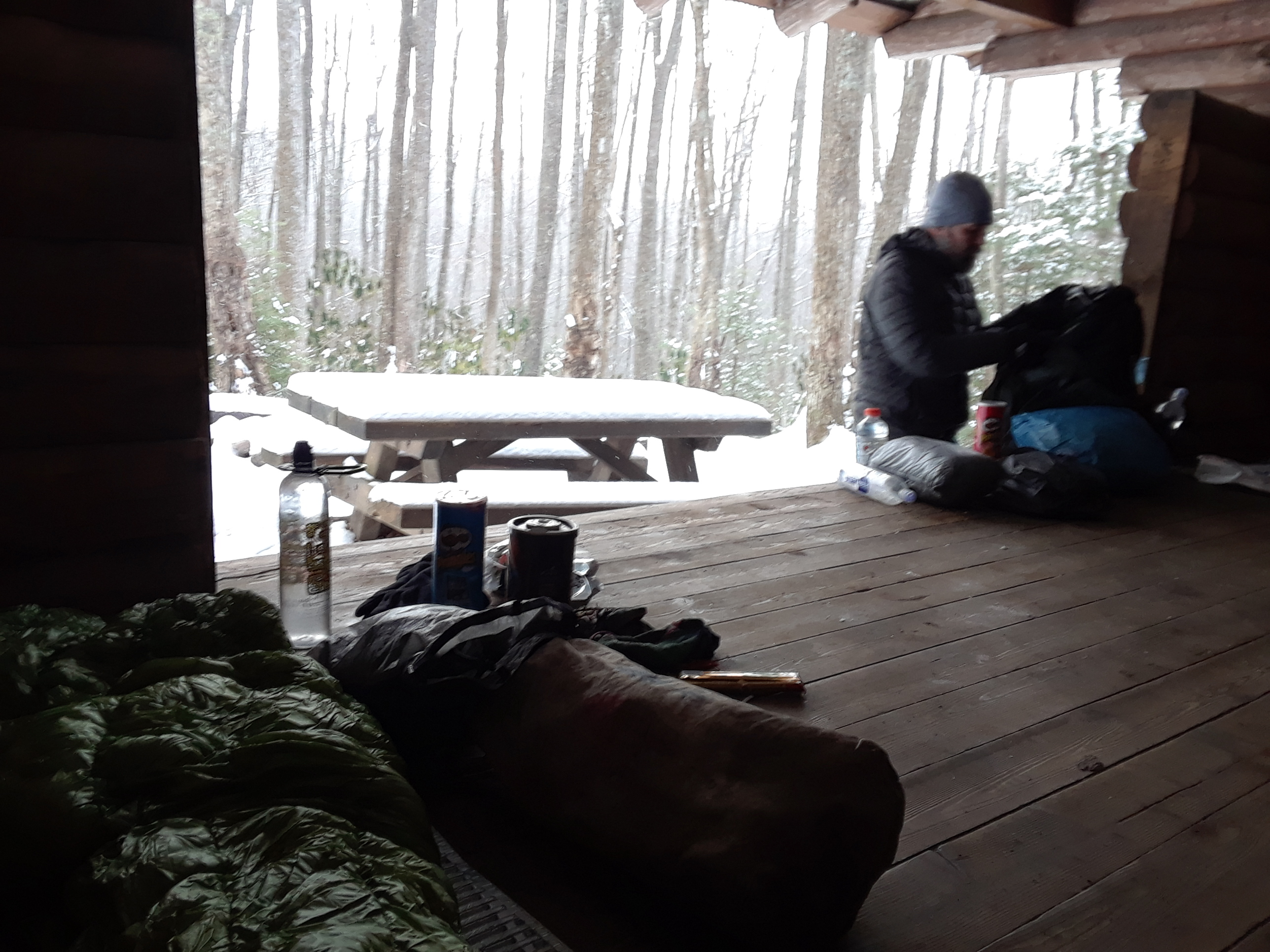 My feet ache with the cold all night, so I don’t sleep much. It feels like it’s around 20 when I finally get up. Both Scoutmaster and I are slow, hesitant to get out of our sleeping bags. It’s COLD!

I head out a few minutes before Scoutmaster. There’s fresh snow on top of the tracks of a section hiker, Snail Pace, who is just ahead. I climb up as the snow deepens. Luckily, Snail Pace has been breaking trail for me. The drifts are to my knees in places. I meet some section hikers who are excited to hear Scoutmaster is just behind me, and then, at the top, I pass Snail Pace.

Now I’m breaking trail through six inches of snow. It’s slow going. The AT is covered in rocks and roots and is trecherous at the best of times. Add a few inches of snow and staying upright is almost impossible. I reach a road and eat lunch, where everyone catches me.

After the gap, we climb up and up, slogging through the soft snow. It’s another 5 miles to the shelter we’d hoped to reach, but we’re exhausted from the snow. I go to get water and come back to four wild ponies who have decided to come to the shelter. They are obviously used to hikers and one of them nuzzles me. I know I shouldn’t, but I can’t help myself: I pet him.

A few weekend hikers show up. I pass out, exhausted from slogging through snow and a bad nights sleep. Then, WHACK! I’m woken by Scoutmaster banging his hefty foam roller on something. Wha…? I startle into wakefulness. Some kind of large rodent is coming out of the rafters, making runs at our food bags. He’s black and white, but he doesn’t have the skunk pattern. Some kind of weasel? 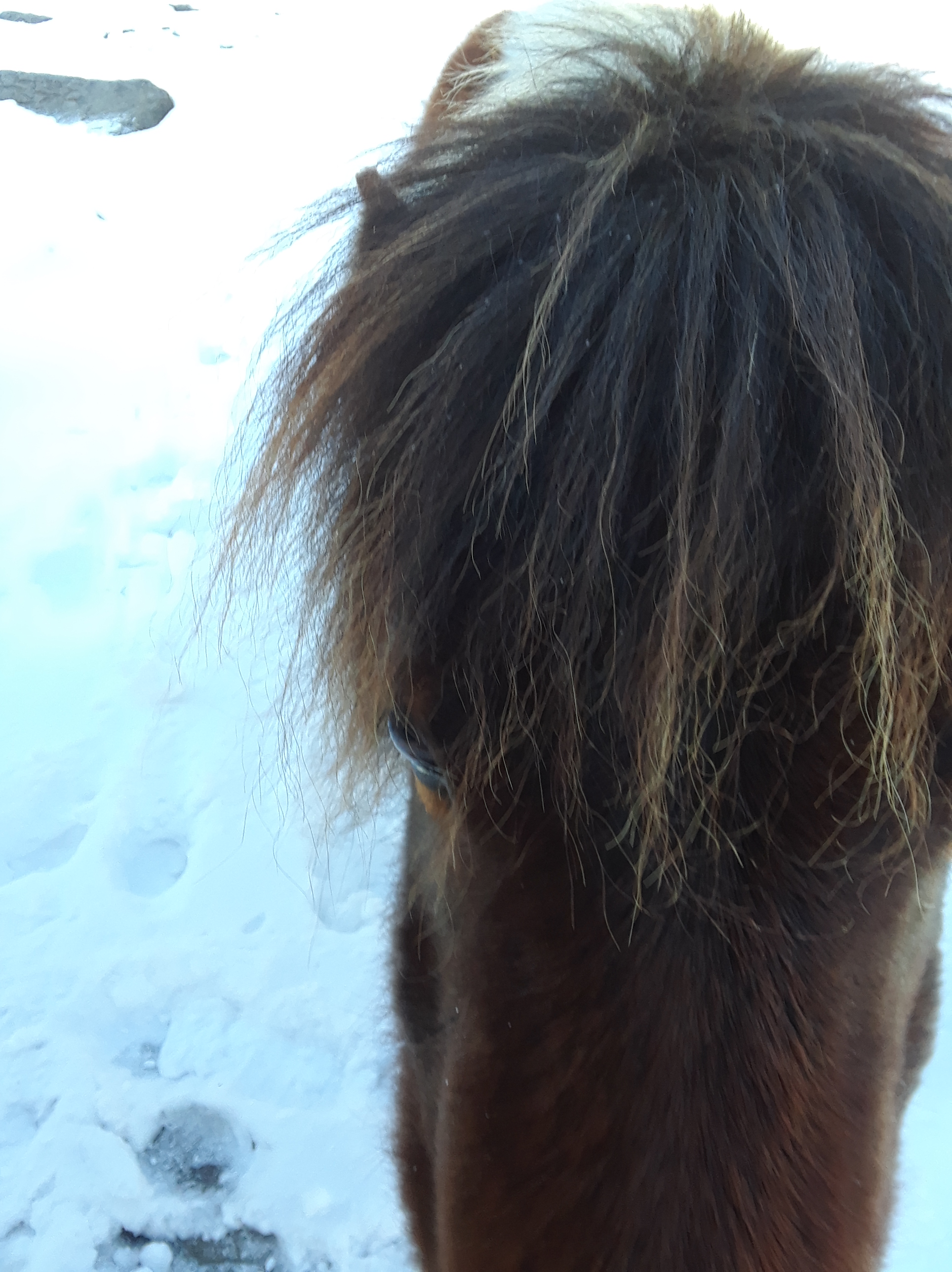 He tests me and I thwack him a few times with my trekking poles. He is utterly unafraid of us and hitting him barely deters him. Then he makes a run at Snail Pace. Snail Pace is having none of this nonsense. He gets to his knees and chases the rodent around the shelter rafters, jabbing at him. Snail Pace corners him, stabs at him a few times, and then an awful smell fills the shelter. Google will tell us later that this was a spotted skunk, something none of us had ever heard of before. He spends the rest of the night terrorising us. We try to hit him with our poles just enough to keep him away, but not so much he’ll spray us. It’s a rough night.

In the morning, the wind is howling and it’s snowing like crazy. We’re exhausted, all our shoes and socks are wet and we smell terrible. We corner the weekend hikers and ask them where they’re getting off trail. One of them tells us he’ll take us where we need to go.

It’s a rough few miles to the parking lot. We follow Anthony, our weekend hiker savior, but he keeps losing the windblown, snow covered trail. Scoutmaster keeps using Guthooks to find it- without the app we’d still be wandering. Finally, we pile into the car, stinking of skunk, for the long ride back to Damascus.