Wild Land’s parents drive us into Helena. The first stop is a Chinese buffet, where I match Wild Land’s dad plate for plate, except my plates have twice as much food. I can barely move on the way back to the hotel. I feel ok, but by 9pm, I’m nauseated, dizzy, and I go puke my guts up in the bathroom.

I feel better in the morning, but I’m still light headed and sick. Wild Land was already planning on zeroing, but I’d hoped to head out. Oh well. Wild Land’s parents take us to the wildlife center, where they have a scale. It reads 110lbs for me. Great. Time to eat more, even if I don’t feel fantastic. We bum around town and meet back up with Thatch, who had been off having his own town adventures. 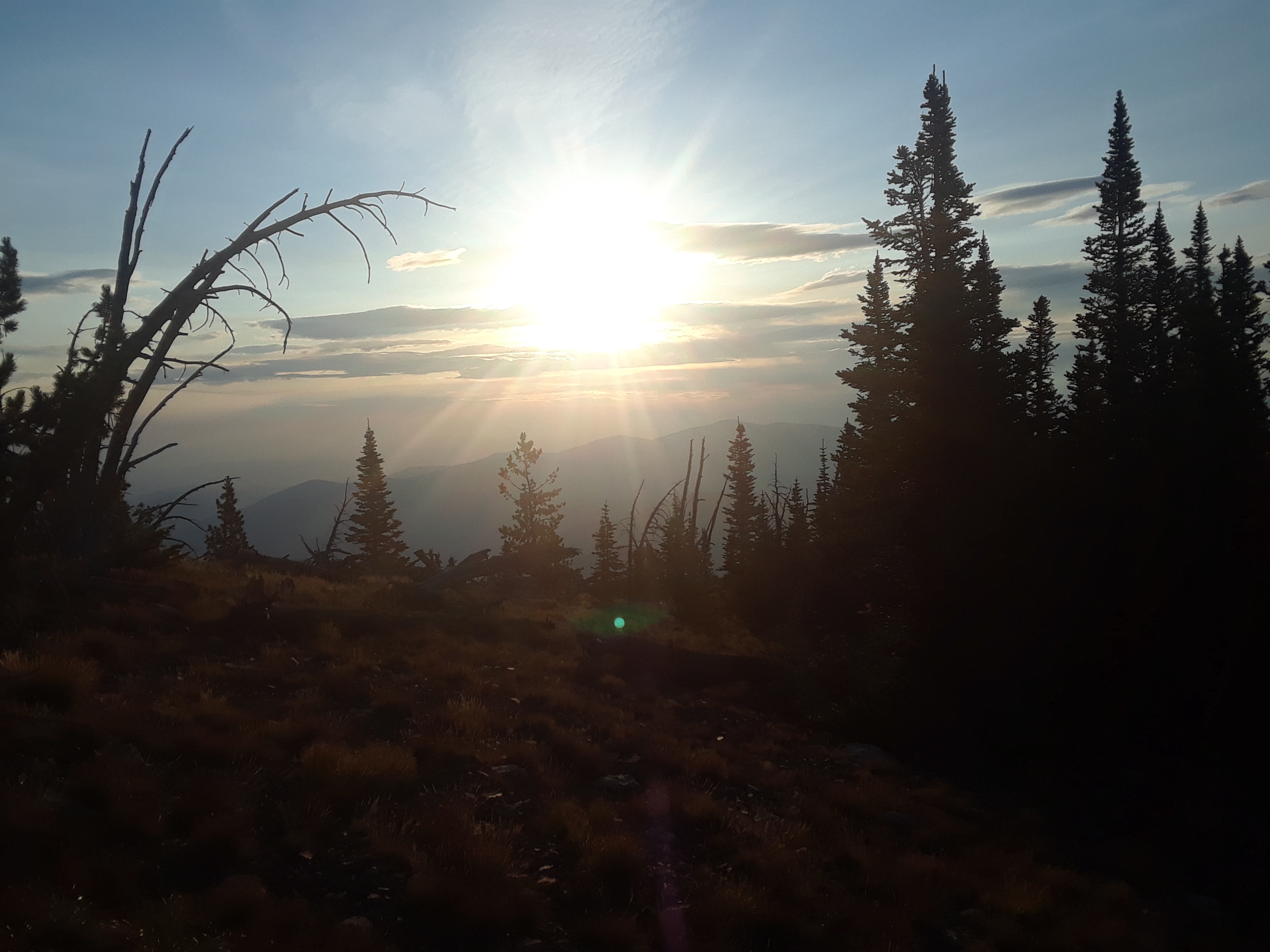 In the morning, Wild Land tells us he wants to double zero. I can’t stay, so his parents drive me and Thatch to the pass. We hug goodbye. “Hike fast and catch up, you jerk.” I tell him. We’ve said goodbye so many times but this one feels more final. 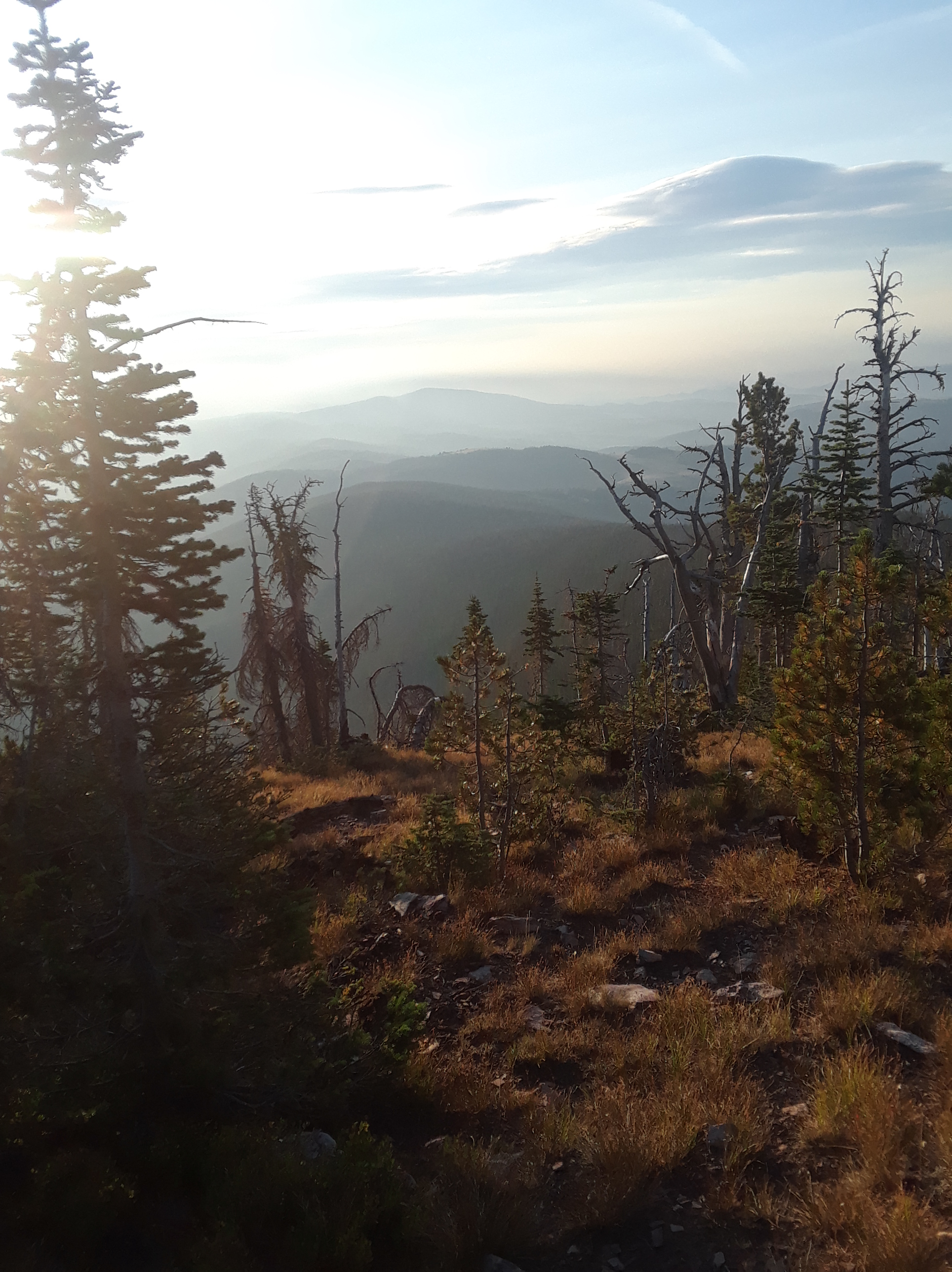 Thatch and I climb the golden hills so typical of this part of the trail. The smoke has lifted a little, so we get some views for a while. It rolls back in in the afternoon. The sun turns bloody and the blue hills fade out like watercolors. We stop to tank up for this dry section at Dana Spring and watch as the sun is completely obscured by smoke. “Sure would be nice to be hiking with a Wild Land firefighter right now.” Thatch quips. We stop a little early, right before a massive climb, since it’s getting dark early from the smoke.

I leave before Thatch in the morning, expecting him to catch me quickly. Someone has squished our gently rolling hills together, turning what were soft slopes before into steep climbs. I climb a hill just to be thrown back down again and immediately start the whole process over.

I stop and wait for Thatch a few times, but I get cold before he catches up. Then, before lunch, I take a wrong turn and have to cut cross country for a hundred feet. Sitting under a scrubby tree is the biggest pile of bear poop I’ve ever seen. I make it a little further down the ridge and eat lunch, when Thatch finally catches me.

We take a break at a fire tower, looking out over smokey hills. Then we turn a corner and see plumes rising from an adjacent hill. We’ll learn later it’s a mostly contained fire, but it’s still a little worrying.

I fall asleep just fine, but I wake up at midnight sick to my stomach. I roll over and immediately throw up with no warning. Thank goodness my tarp doesn’t have a floor. This continues every half hour or so until it’s finally light enough to get up. I throw up one last time as I pack up my tarp. If I had a job, I’d call in sick, but you can’t call in sick to hiking. It’s 2 miles to a trailhead, where Thatch tentatively suggests hitching to town. It’s only another 13 to a busier highway though and I don’t feel too bad unless I’m going up hill. 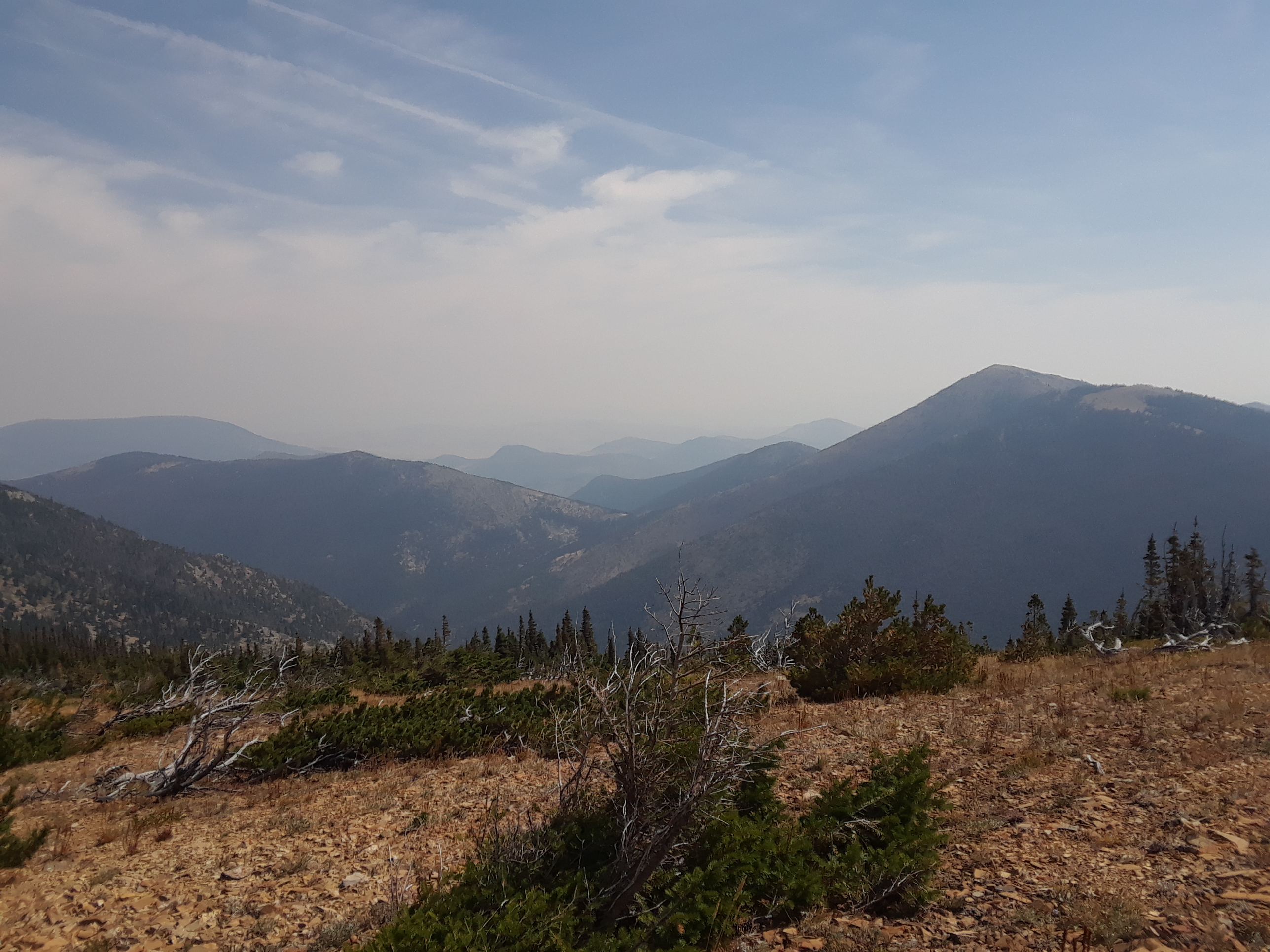 Of course, there’s a lot of uphill. I take frequent breaks to try and quell my nausea. But soon the views are breathtaking and that takes me mind off every thing else. I can’t bring myself to eat, but I’m keeping down water, and when I find a huckleberry patch, I cram a few in my mouth. You’re never too sick for berries.

« Anaconda to Helena
Lincoln to Augusta »