Fun Size and Shake'nBake, off on another whirlwind adventure: Waynesboro to Front Royal

I poke my head out of the hotel room long after hiker midnight. A car pulls into the parking lot and a familiar head leans out of the window. “First star!” Shake’nBake shouts.

We spend most of the day resupplying, and shuttling Shake’nBake’s car 100 miles down the trail. He tells the shuttle driver his bear arms joke and it’s like no time has passed since the PCT. We are dropped back at the trail, where it’s a short seven miles through the sunshine to the first shelter. It’s a Saturday, so tents are everywhere. I am the only thru hiker, but still feel like I’ve stepped back into the bubble.

Shake’nBake is notoriously bad at mornings, so I give him a break. We sit and drink coffee under my tarp until almost everyone else in the shelter has headed out. We’re only planning on 13 miles to the next shelter anyway. I struggle behind Shake’nBake on the hills: I’m still exhausted from my big section, and his long legs eat up the ground. 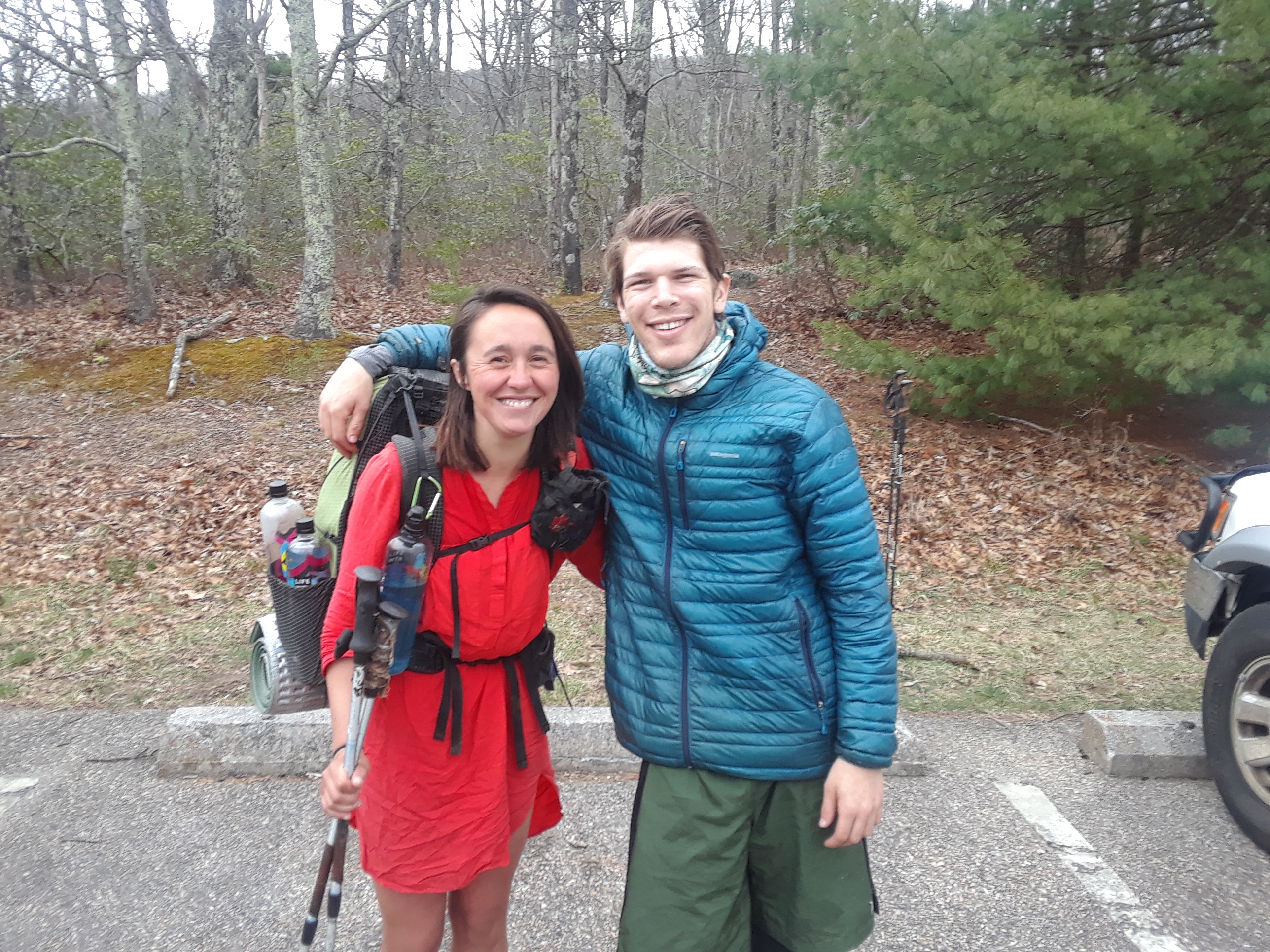 We pass a parking lot and I hear a shout. “Hey!” It’s Young Blood, a CDT friend, out for the weekend and hoping to run into me. We catch up on the side of the road and then it’s time to hike some more. We reach the shelter before 3, beating everyone who left before us. We chat as they trickle in. One of the section hikers is some sort of high up military official, who has body guards tagging behind, but he and his wife are very down to earth and planning on thru hiking in a few years. As always, the people are what really makes the AT interesting. We bum Easter candy from the body guards while Shake’nBake tries to get me a job. They ask if I can shoot a gun and drive a car more than 100mph. Since I don’t even carry pepper spray and 3 miles per hour is my top speed, this obviously isn’t going to work. 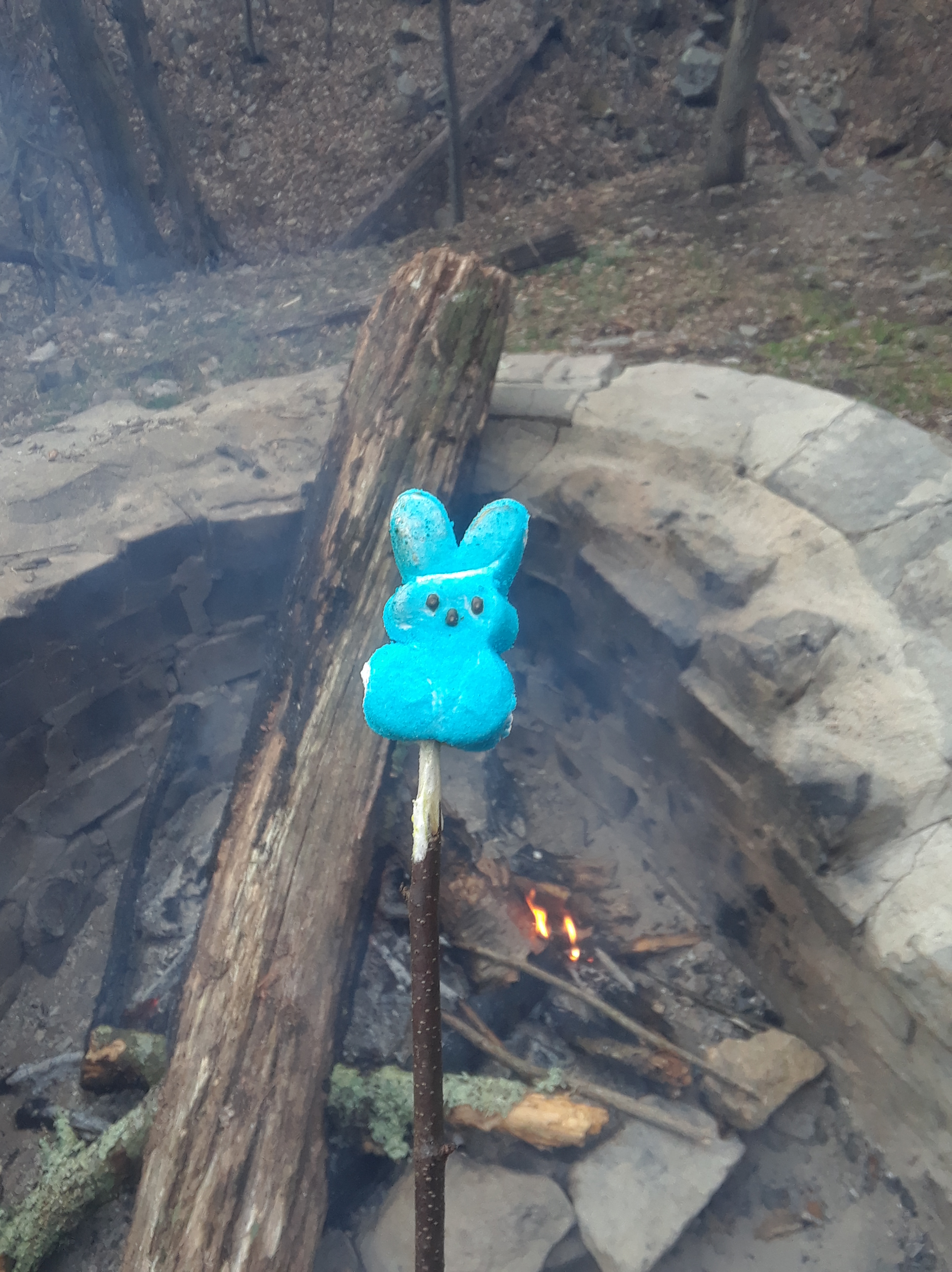 We do slightly better leaving in the morning- we do have more miles to make today after all. We climb up and drop down in the way the AT does, bumping into Leapfrog and Safety Pin time and time again. They are slack pack section hiking southbound, sometimes with their dog, Aspen, and sometimes without. We stop for a nap, and still make the shelter before 6. A mouse rustles next to my head half the night, before I get fed up and grumpily move away from it.

It’s cold in the morning and we’re slow to leave. I’m still sleepy. It spits rain after lunch, so we stop early, curling up in a shelter at 2pm for naps. CT, who will soon be called face plant, shows up again. He’s a flip flopper who started at Waynesboro and he’ll keep pace with us for the whole section.

It spits rain in the morning, but we head out anyway. We need to make up some of the miles we sacrificed yesterday in favor of naps. The trail is mellow: Shenandoah is flat by AT standards. We have one good rain shower, and then the wind blows the clouds away.

And the wind keeps blowing. My dress spends half the day fluttering around my waist (good thing I prefer walking in the back). We climb up to Stony Man cliffs and the wind almost knocks me over. We pass Leapfrog and Safety Pin’s van, where they have left us cokes under the front tire.

We see Leapfrog and Safety Pin talking to Face Plant (who earns his name on this stretch by going head first into some rocks and receiving a nasty gash) at the shelter we’d planned on stopping at. They recommend pushing onto the next shelter and it’s clear why. The wind howls directly into the opening of the shelter, and I’m instantly cold. Pushing on means a marathon, and Shake’nBake is fighting toe blisters. We don’t have much choice though, and Shake’nBake is a trooper, not complaining even once.

We’re a little lazy in the morning. It’s cold, so I give Shake’nBake a break from his normal Fun Size alarm clock. “At least it’s not cold enough for our water to freeze!” I’m chipper as ever. Shake’nBake opens a bottle and watches as ice crystals immediately form, his water turning to slush. He shoots me a very unimpressed look.

We pass Leapfrog and Safety Pin. They’ve taken to giving us a little trail magic every time they see us, and this morning they hand us candy bars. Then, it’s less than a mile to a wayside, where cheeseburgers and coffee are calling our name. 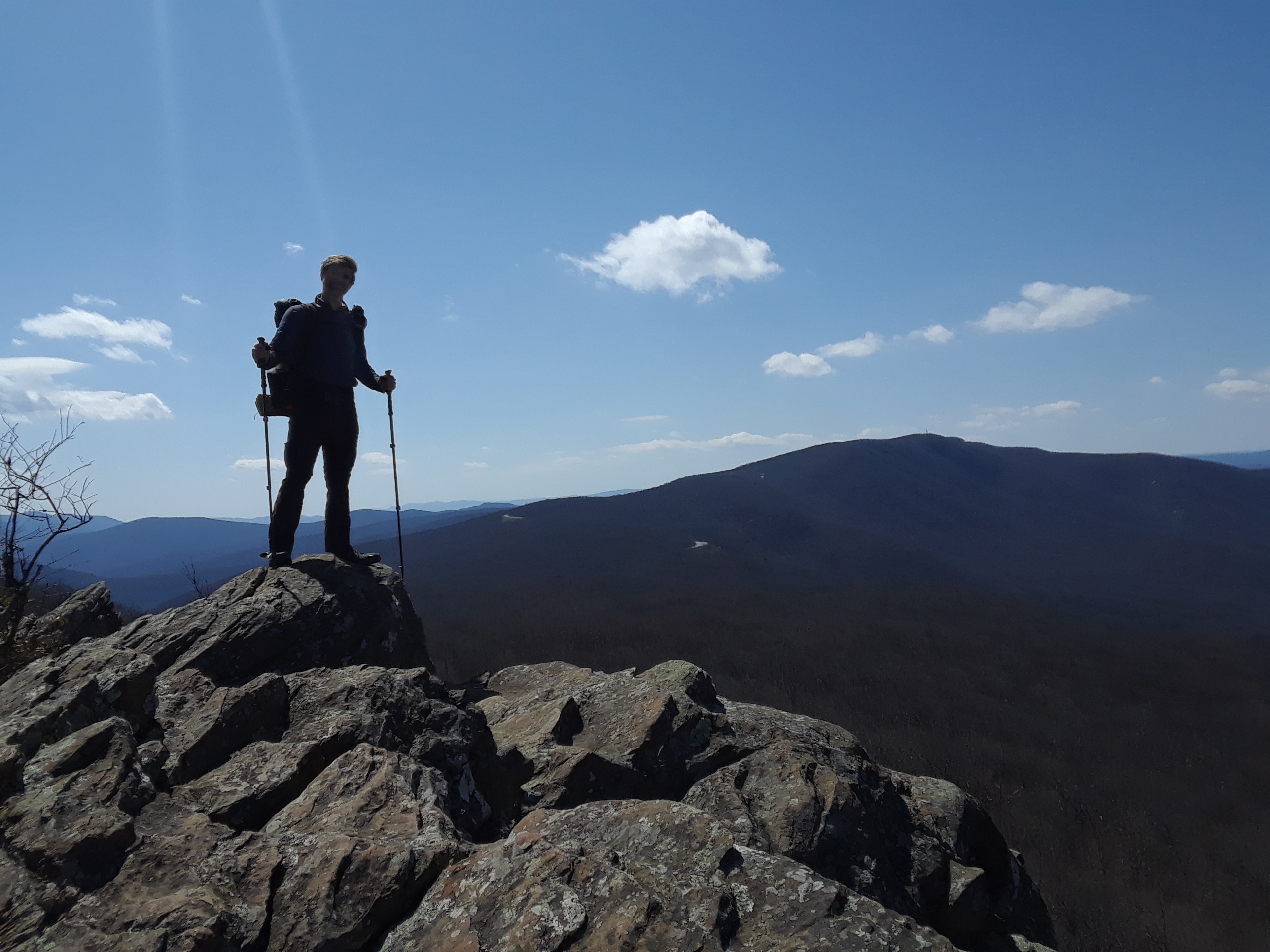 After lunch, a woman who I’m pretty sure is Anish (former AT and current PCT speed record holder) passes us, slack packing. I know she’s trying for a calendar triple crown this year. We leapfrog back and forth, but I’m too shy to ask if she’s who I think she is.

We reach a shelter just 3 miles from town. We sit on the porch, eating dinner and watching the sun set. Deer come down and rustle in the leaves behind the shelter, watching us eat. I tie our Ursacks to the bear pole (I’m much too short to be able to hang them the way they are supposed to be). We turn in, but I can’t sleep. I lie awake, listening to the deer, when I hear something hit the bear pole. I wake Shake’nBake and he peers over the railing. Raccoon! Well, it wouldn’t be a hike with him if we didn’t have to fight our old nemesis. Shake’nBake goes and hangs our bags well out of the reach of clever paws. In the morning, it’s just a few miles to town and my first full zero in over 400 miles.